we respect your privacy!
Home Arena Animation How is VFX used in Games Design? 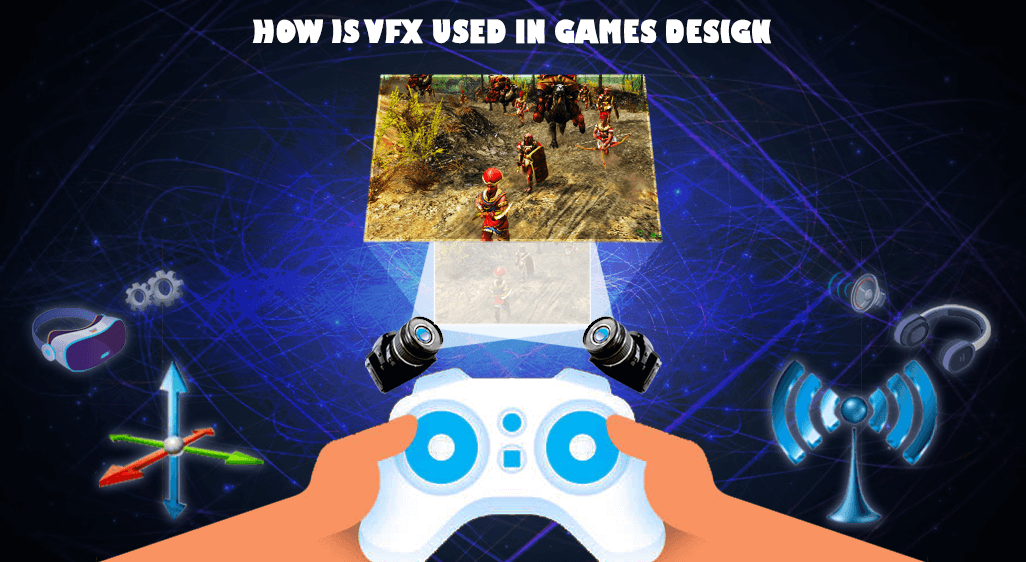 Are visual effects (VFX) a special effect or a plain animation? Everyone would agree that VFX has something to do with visuals, pyrotechnics, and other gaming effects that we all like. But what exactly is the meaning of this phrase, and how does VFX work in game design? While designing any type of game, including mobile, PC, VR, and others, knowing the proper answers to these questions is critical. The good news is that we have all of the information you’ll need regarding creating VFX for games, based on our extensive expertise in the field. You’ll also learn about VFX for game designs and where you can learn the same like a pro.

Are you aware that the worldwide animation, visual effects, and video games business were worth $ 264 billion in 2019? That is to say, global customers like interesting and high-definition visual experiences. VFX and video games are one of the fastest-growing categories in the worldwide media and entertainment business, thanks to technical innovations. Factors such as targeted broadcasting hours by cable and satellite TV, availability of low-cost internet access, penetration of mobile devices, and the rising popularity of streaming video all encouraged the rise of animation, visual effects services, and video gaming.

VFX is a massive and competitive sector with several chances in the media and entertainment industries right now. According to Research and Markets, the animation and visual effects market will grow at a strong CAGR of over 9% from 2020 to 2025. And this is fantastic for video game firms since the global VFX software industry is growing as a result of customer demand for high-quality media and the adoption of cloud for VFX. Visual effects (VFX) are transforming both the development and reception of video games. For instance, 2D animation will persist, but mostly in the form of hybrid 2D/3D animation.

Visual effects (VFX) are animations created by VFX artists to improve the authenticity of a game and impress players. They are not the same as special effects. VFX may also be defined as the technique of employing graphic tools and specialized software to create lifelike motions and effects in gaming situations. To have a deeper understanding of VFX, read more about how it is utilized today.

Video games VFX are often classified into two categories: gameplay effects and peripheral effects. Artists, for example, produce magnificent pyrotechnics, gateways to other dimensions, as well as dazzling effects that draw the player’s focus to them. Peripheral effects, on the other hand, are concerned with the formation of more nuanced processes such as heavy rain, wind, dust, smog, and other natural occurrences. Real-time VFX, which happens as events take place throughout live gameplay, typically provides the best gameplay experience. When the entire process takes less than 1/60th of a second, we can say that the VFX in a game is in real-time. This generates a feeling of amazement and elicits an emotional reaction from the gamer.

In a game production studio, having a competent team, excellent planning, and implementing visual effects in three-dimensional forms have all become essential. The more sophisticated the technology progresses, the fewer constraints there are for studios attempting to create accurate representations. The developers can use visual effects to create experiences where the player receives feedback and has a clear grasp of the repercussions of their choices. This gives the heartwarming sense that the game understands what a player is doing and replies accordingly.

Types of VFX Used In Games

The VFX process, often known as the VFX pipeline, is separated into numerous forms. A VFX team can use only one or all of the types mentioned below, based on the objective that has to be accomplished for a game.

The process of morphing is the transformation of one item into another. It’s like alchemy that can’t be done in real life but is perfectly doable in games. Some gaming characters, for example, employ magical abilities to morph into amazing beasts or to summon a magical weapon into their hands.

Motion capture (MOCAP) is the method of digitally integrating real-world motions into a game. Recorded movements can be performed by any person or animal. Keanu Reeves, for example, was cast as the central protagonist in “Cyberpunk 2077.” As a result, he executed all of his character’s actions, which were then captured and translated into the game by VFX designers.

Additional characteristics for game characters or some settings are created using the computer-generated imagery (CGI) approach. There’s a fascinating narrative of CGI growth in gaming, which has led to CGI being extensively employed in games today. The method is similar to motion capture in that the game actor is captured in real life. Then VFX artists use the actor’s anatomy as a starting point, translating it into CGI and adding the essential features to give the game persona a distinct look.

The fact that mobile devices have a smaller screen and lesser capacity than PCs and consoles is by far the most significant visual effects aspect in mobile games. This implies that VFX for mobile games should be lightweight and low-resolution. Its primary goal is to carry out the essential functions. That is, to show the player’s interactions with the game while also creating the essential gameplay and peripheral information. As the avatars in mobile games are so little and have such restricted joint mobility, motion capture isn’t employed for VFX. Furthermore, because the budget for mobile games is typically lower than that for PC, VR, or console games, there is little point in spending money on performing or the MOCAP technique.

2. PCs, Consoles and Other Platforms

For gaming on PCs, consoles, VR headsets, and other platforms, high-quality visual effects are required. Most platforms offer a larger screen and performance than mobile games, allowing for more intricate gameplay and elaborate design. Visual effects for VR and console games should be given special consideration, as this gear should deliver the most enjoyable experience. VFX artists normally use as many innovative ways as possible while producing games for these platforms to produce authenticity and amusement.

VFX artists in video games typically use different software and tools for different sorts of visual effects. As each package has its own set of advantages and disadvantages, many VFX artists mix them to create the most spectacular impact possible. So, here’s a rundown of some of the best apps for creating VFX in games.

3Ds Max software is a good choice if you want extra authority over the minutiae of visual effects. Its range of tools emphasizes rendering, details, and high-quality design. You can also generate elements developed from scratch, convert motion capture to digital format, and use CGI to process sequences. In a nutshell, the application gives you everything you need to create full-fledged VFX in games.

Since Unreal Engine and Unity are both game design systems, they come with a suite of tools for producing visual effects in games. On any gaming platform, you can create basic gameplay and ambient impacts. The major benefit of this technique is that you can use the same software to design a game and VFX for games in Unreal 4 or Unity, as well as an in-editor to monitor the effectiveness of visual effects. You can discover fully prepared assets in such gaming engines that can be adjusted to your requirements just to save time.

With Little Effort Get Incredible VFX

As you’ve seen, creating an excellent game VFX is no easy task. This method may require a team of professionals to achieve the aim, ranging from animators to composers and 3D specialists, depending on the amount of intricacy and accuracy of the required VFX. Since it’s so complicated, how can you produce VFX for video games with the least effort? The solution is straightforward: outsourcing!

Arena Animation is a professional design firm that specializes in 2D/3D art, animation, and other creative services. Our VFX development portfolio and hundreds of completed projects demonstrate our proficiency. Most importantly, we are prepared to free up your time and effort so that you can focus on more vital tasks!

VFX will undoubtedly remain a key component in many games, but we won’t see tremendous aesthetic improvements, because the current VFX quality is quite good. As a technique to distinguish out in an increasingly crowded sector, we’ll see a growing array of artistic styles.

Get in touch with us straight away so that we can assist you with our VFX and game design services and courses.