we respect your privacy!
Home Arena Animation Unity VS Unreal – Choosing The Best Engine For Your Next Gaming... 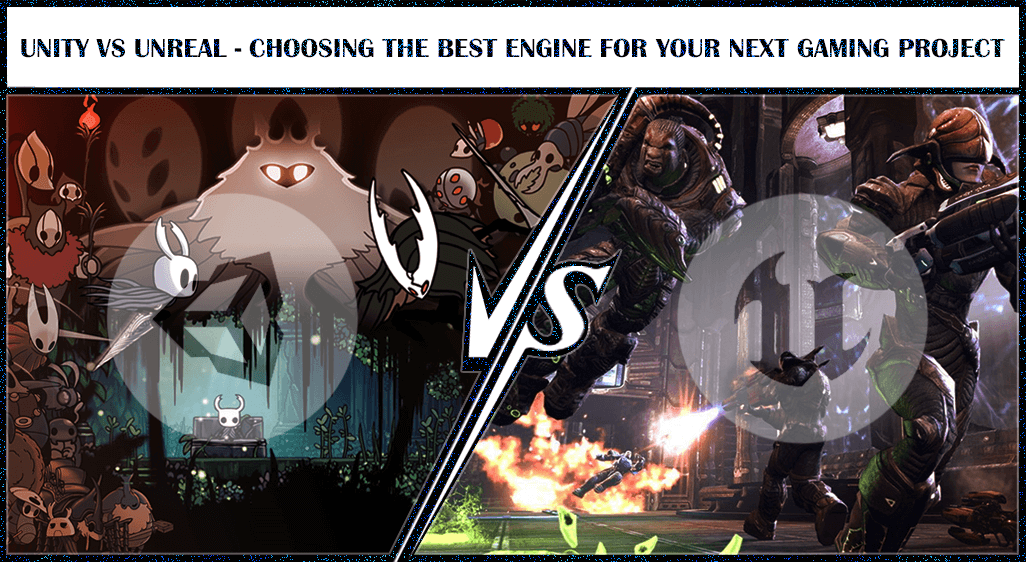 All set to try your hands in video game development? Just like the improvement in game techniques and interface design, the use of game engines has reached another level. So, whether you are a newbie or a pro, your commitment to the game development process should not be taken lightly. Depending on the scope of the game making, there are several factors to ensure steady progress right from the beginning. Remember, the choice of a game engine can heavily influence your team’s performance while moving forward. Here are a few aspects to consider when looking for the right tool.

With the co-existence of open-source and proprietary software, sometimes it gets hard to pick one over the other. You will get a large and dedicated team of engineers who will be developing cutting-edge features and polished editors. However, the user interface of the free or open-source projects may not be on par compared to closed-source counterparts.

In the case of proprietary software, you won’t be able to fix bugs or optimize the part of the engine according to your needs. On the contrary, you can contribute to open-source projects as a fellow professional.

Unity and Unreal are two popular choices among the proprietary tools in the industry. There are plenty of paid assets, training materials, plugins that can save your time while making any one of these your choice.

Training material, support, and documentation play a significant role while choosing a game engine. The proprietary engines usually have the most supportive system, as the companies have products to sell and they want their customer to be happy. On the other hand, the documentation of the open-source projects is not the standard one, as people keep contributing to the source code.

Game engines like Unity and Unreal are two popular proprietary tools that offer professional instructors a broader market compared to free ones.

When it comes to choosing the right game engine, remember to take note of the products that come with a visual editor and the ones that come with Software Development Kits (SDKs). Whereas non-programmers and artists use visual editors, SDKs are for experienced developers. As per the design choice of the developer and considering the workflow, engine or editor is chosen accordingly. The best part of working with SDK frameworks like Unity and Unreal is that you can work with a variety of third-party programs to edit your data.

Depending on your savviness in coding, supporting languages turn out to be a big factor. Whether you agree or not, it is not easy for everyone to learn a new language anytime from scratch. Nowadays, mainstream game engines like Unreal come with a visual scripting language. However, a few game engines come with Domain Specific Language, which saves a lot of time compared to what it takes working with general programming scripts.

So, you will get to learn a lot of things no matter which game engine you choose. With your dedication, experience, and creativity, these powerful tools let you accomplish far more than what you see on the surface. Above all, it comes down to what you are looking for and what you are hoping to get out of the process. In the following section, you will find a showdown between the two trending game engines, which have been ruling the game development industry since 2015.

When to choose Unity?

There are a lot of game developers and artists who march proudly their Unity badge on, and there are various reasons for it. The first and foremost thing is the ease of use. Since Unity uses C# language for coding the programs, it comes easy to build and create a very intuitive interface and a straightforward architecture. As of July 2020, Unity’s plans consist of a Bolt Visual Scripting tool without any additional charge, and it has made unity a lot more convenient. With this feature, makers can avoid bulk coding work. Moreover, the 2D game development feature in Unity is damn good, which has made Unity an ideal choice among a lot of new game developers.

When to choose Unreal?

Unreal is known to represent big studios, which have made their names in creating beautiful games with photorealistic quality. The outstanding graphics quality has made Unreal one step ahead of Unity. You can create beautiful graphics with Unity as well, but it will take longer and you might not be able to reach the same quality. Whereas accessibility is concerned, Unity is more accessible, but the coding efforts are lesser with Blueprints of Unreal.

Why choose Unreal over Unity – A quick comparison:

Whereas coders like Unity, Unreal is a priority for the artists. However, it’s been a popular debate among game developers for years now, but you should make your decision from both the technical and business standpoint. So, let’s see the parameters that set both the engines apart-

Graphics: With Unreal Engine 4, you can achieve better visuals quickly. On top of it, a lot of graphics features are available in Unreal Engine 4, whereas Unity comes with free assets that require separate installations. Though Unity doesn’t fall much behind unreal, it just takes longer to deliver the quality result.

Features: Both the engines are competitive in terms of feature sets. Unreal Engine 4 comes with outstanding AI implementation, which helps to achieve an outstanding result with Behavior Tree System. Next to it, the making of 2D games suggests the developers go with Unity, as the animation tools and editors make the 2D platform easier to handle. However, Unreal comes with the Paper2D plugin which is considered widely among the developers as well.

Target audience: Unity is quite popular among the independent developers, whereas Unreal fits better for the big studios. The Unreal marketplace comes with additional plugins and assets, which are used in prototyping. So, apart from offering high-quality graphics, Unreal is much more scalable than Unity. Hence, we can say that big projects find the lack of capability as a bottleneck for Unity.

Coding: Blueprint code editor is for Unreal Engine 4 (UE4), and Prefab is a code editor for Unity. UE4 Codegen produces a valid C++ class by compiling a piece of code, which is known as Blueprint.  On the other hand, Unity’s Prefab is a UI tool that links different scripts together. After Prefab, there came Bolt (advanced version of Prefab), which Unity included in all its versions. When it comes to coding language itself, Unity uses C# and UE4 uses C++. Since C# is easier than C++, finding a seasoned Unity developer is not a big deal. However, it is an undeniable fact that coding with C++ gives an edge to the whole gaming work.

Unreal Engine optimizes draw calls with the progress in making games, and the optimization becomes visible with the increased complexity in the game scenes. However, Unity increases its execution time steadily and proportionately that Unreal Engine does not do.

Well, now it’s the final countdown to say which one is better between Unreal and Unity, and we favour Unreal here. As graphics is the fundamental part of any digital motion work, look no other than Unreal Engine to get the best job done. Since Unreal is investing a lot of effort and Unreal Engine 5 is coming up, game devs are expecting a lot of surprises to explore.

However, if you want to build your career in game development, then knowing the fundamentals, as well as new trends in animation and motion graphics is necessary. Why not join ARENA ANIMATION – PARK STREET to learn cutting-edge technologies from experts in the industry? With Media and Entertainment Skills Council (MESC) certification, Arena is leading the Gaming, VFX, animation, web, and graphics design training gracefully.