we respect your privacy!
Home Arena Animation What’s The Distinction Between Animation And Visual Effects (VFX)? 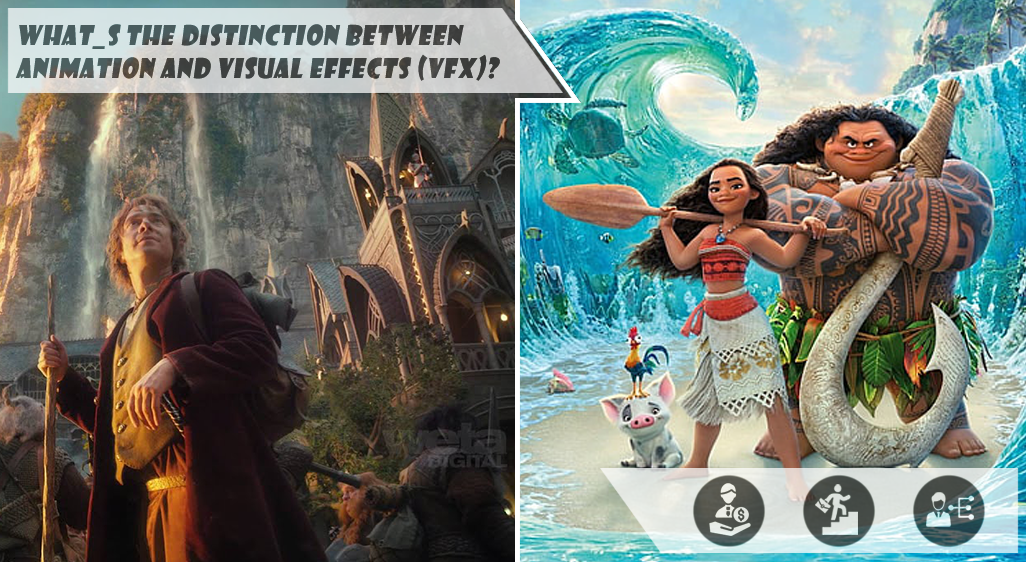 The field of animation has taken on a new direction as a result of technological advancement, and since that time, the demand for it in the media sector has increased. The main components of a high-budget film or television program are animation and visual effects. In the past, realistic effects were used to make movies based on various shows, but they had a little discernible impact. By combining the appropriate amount of animation and visual effects, this transition was made achievable. With this cutting-edge strategy, investing time, money, and effort has been worthwhile. To acquire new skills and choose a job in the media business, you can also enroll in the top Animation Course in Kolkata.

Science fiction films have been upgraded thanks to VFX and animations that produce fictional digital worlds that appear remarkably genuine. Even Nevertheless, there are still many differences between animation and visual effects, even if we use the terms interchangeably. You might be surprised to learn that they have distinguishing qualities that set them different even in the professional world. So let’s get more in-depth information regarding animation and VFX.

Our eyes can only hold an image in memory for roughly 1/10th of a second, thus several images moving quickly one after the other give the impression of movement. To develop an animation sequence, an animation student needs to learn how to employ the most recent techniques, including 2D hand sketching, 2D and 3D computer-generated graphics, stop motion, or model animation. So, if you’re artistic and want to use your creativity to make something lovely and special, you might consider trying out a suitable animation course.

The process of making any fictional figure come to life is known as VFX. It contributes to the creation of the fantastical worlds you see on television and in entirely computer-generated movies. You may also use VFX to make visual effects for advertisements and video games. As you can see, visual effects (VFX) will dominate the majority of the entertainment sector in the coming years. VFX can be found in everything from science fiction to romantic comedies. One can readily establish themselves in this industry as a VFX designer because it is pretty simple to master. If this method appeals to you, the Animation Institutes in Kolkata can assist you in starting a career in VFX.

Nowadays, every high-budget movie utilizes VFX to provide special effects and draw viewers. As a result, it has become difficult to distinguish between reality and illusion. It has been said that VFX is responsible for making things that are virtually unimaginable in reality. It is more akin to altering photographs by adjusting the saturation, colours, and surroundings. The goal is to produce something that feels and looks authentic. If you’ve seen the creatures in Harry Potter or the flying dragons in any fantasy film, you won’t be astonished to learn that they are entirely computer-generated. Every great film you’ve watched so far was made using visual effects.

Critical Distinctions Between VFX And Animation

It will be easier for you to understand animation and visual effects if you consider their main distinctions. It can also be helpful to enroll in an animation course in Kolkata to comprehend the variations.

Media companies are involved in both animation and VFX. However, several variations set their application apart. You must spend your time creating characters using animation software or drawing cartoons if you want to be an animator. You should also become familiar with job titles like Flash animator, 3D modeler, graphic designer, and art director among others. There are countless professional guidelines.

To execute a digital painting, rotoscoping, etc., a VFX artist must first comprehend the concept of composting and work with various technologies. VFX artists must develop the ability to combine artistic components and apply them in real life using either raw video, remotely or while working in the field. A specialist may decide to pursue a career as a lighting artist, layout artist, matter painter, etc. You should enroll in a reputable animation institute in Kolkata to assist you in making the best option.

These days, the animation is used in every industry. Every graphic illustration you see, from media commercials to movies and flicks, is a component of animation. It might be an online game, a website, or even an advertising campaign. On the other hand, visual effects are more frequently used in films, documentaries, and television shows. Here, industry experts pick up VFX skills and learn how to use their imaginations in novel ways. VFX is currently in great demand in the online gaming sector. Have you heard of Sony and Rockstar Games? Because businesses require specialists who can bridge the demand and supply chains, they usually employ VFX artists.

Only when a career is growing can one see compensation rise. Career development depends on the production company you are working with, regardless of the field. Currently, there is a severe lack of animators and VFX artists due to the high demand. So if you decide to become an animator, you may simply make money. At the end of the year, starting salaries for animators and visual effect artists are anticipated to be in the range of 6 to 7 lakhs. To secure the desired position in a well-known media organization, you must take the initiative and enroll in the top Animation Course in Kolkata.

You need to use a distinct set of software to improve your abilities as an animator and VFX artist. Now, if you’re a newbie, you can also purchase software with dual functionality, but this only addresses a very specific need. The most common animation programs are Autodesk Maya and 3Ds Max, which may be used by both visual artists and animators. The most fascinating aspect is that you can also produce 3D visuals, which are highly sought after right now. You can enroll in the top VFX Course to improve your 3D graphics skills.

Choose Nuke or Adobe After Effects if you’re looking for something specifically for VFX; both programs can make creating visual effects simply. You can use a variety of tools to assist in the bulk production of visual effects. Adobe Photoshop satisfies all the requirements and is regarded as a standard tool for any animation if you’re planning to create realistic environments and characters. Before you subscribe to or purchase a software package, you must rank your requirements in order of importance and become familiar with the product’s features.

Every aspect of the animation industry has advantages of its own, but you should always pursue your passion as a profession and select a specialty in line with it. Do not rush; rather, understand the pace and update your skills to suit the requirements of the job. The media sector will experience a significant expansion during the next three to four years. Additionally, the OTT platforms and online education system will undoubtedly increase the fields’ popularity both domestically and internationally. So why quit now? Investigate this world of creativity, which offers countless opportunities.