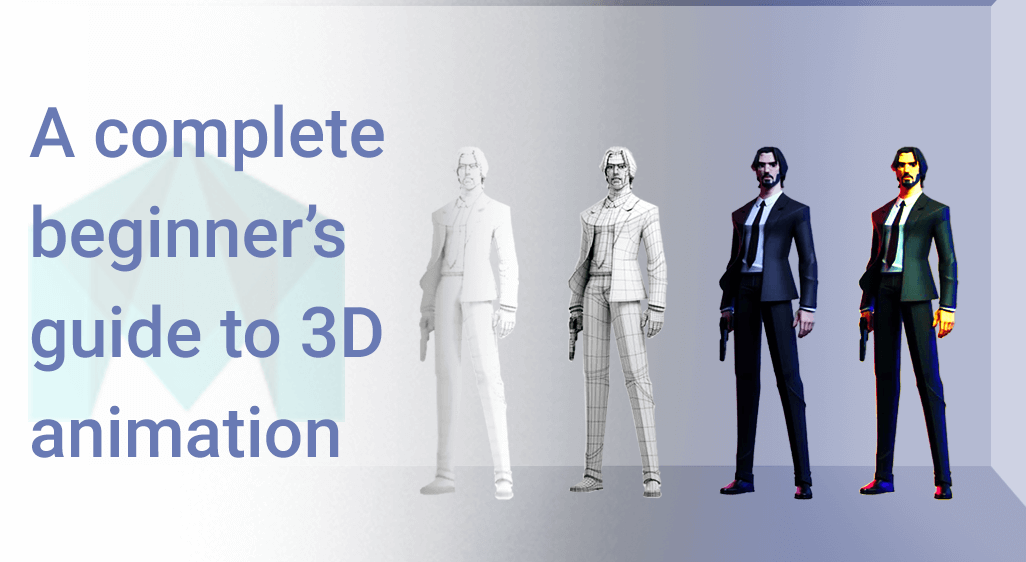 3D is a huge field that can be used from animation to gaming to printing. Regardless of which branch you pick;a beginner needs to have a basic understanding of 3D.

Why? Because often, what you know about 3D gaming can help you be a better 3D animator. Similarly, what you learn in a 3D animation course helps with 3D gaming.

For example, say you create a 3D character for animation. It can be exported to a game engine and made into a playable video game character, or you could 3D print it as a toy for a child.

So, that’s the first step in our beginner’s guide to 3D animation – learning the fundamentals.

What are the basics of 3D?

3D is when you use a computer to move any object through three-dimensional space. It moves and rotates following the same principles as in real life. There are three building blocks to it:

Modelling means creating an object in a cage and then moving it about until it forms your object’s shape.

This is adding textures or materials to make the surface of the object look real or alive.

This is the final step to make the image pleasing to the eye.

When you dive deeper into 3D, you’ll discover more blocks like compositing. But those make for just 5% of 3D. The majority 95% of 3D is modelling, texturing and lighting.

What is 3D animation?

Venom, Cars, Aquaman, Ice Age, Croods, Life of Pi, and Jungle Book, are all examples of 3D animation. Also, called 3D CGI (computer generated imagery), it deals with all the 24 frames of a film.

In 2D animation, you generate a series of drawings with small changes in each subsequent drawing. When you play the images rapidly, one after the other, it gives the illusion of movement.

In 3D animation, you produce images using a computer. First, you make the model, then the animation is moved about in the model like a puppet. And finally, you change the placement and poses of the model to give it movement.

What 3D animation software to learn?

The next step in our beginner’s guide to 3D animation is knowing the right software. There are dozens of them, such as Zbrush, Maya,Lightwave, Cinema 4D, Blender, MotionBuilder, Mudbox, FBX, 3DS Max. It makes choosing just one to learn confusing, especially if you are not training in an animation institute.

Some experts say to learn what big studios like Disney use (Maya and Zbrush). But there is no real industry standard because each studio uses a different one for different parts of animation.

For instance, for one part of the 3D animation, they may use Arnold and for another Houdini.  Then there are studios like Pixar who have made their own software (Presto).

Does not knowing a particular 3D animation software affect your job search?

In India alone, there are over 400 animation studios like MPC, Green Studio and Electronic Arts. Each likely uses a different software.

So, it doesn’t matter which 3D animation software you learn. What matters while applying for an animation job is your artistic and technical skills. A studio will only see if they like your work or not. So, the priority is a great portfolio and showreel.

The great news is that a good studio will train you in the software they use if you don’t already know it. Plus, you can easily transfer the knowledge of one software to another if you know the theory and basics of 3D animation really well.

What to keep in mind when looking for 3D animation software?

If you enrol at a decent Arena animation institute in Kolkata, you don’t have to worry about anything. Simply join a certification course in 3d animation after completing 10 +2.

They will teach you the most commonly used software. Plus, they will bear the expense of buying the software, which can be quite high. But if you’re learning at home and on your own, keep these points in mind when looking for 3D software:

The one software that fits these criteria is Blender because it is 100% free.

What jobs can you get after a course in 3D animation?

This job entails a variety of tasks, from planning to crafting. Therefore, the need for 3D animators, particularly those who have expertise in one area, is very high. To get this job, you need to have strong computer and artistic skills.

This job is all about building 3D environments and characters. It is where the character skeleton is made, which animators then control. 3D modeller jobs are available in movies, healthcare, architecture and more.

This job entails creating extremely photo realistic textures. So, the skill required here is a solid grasp of colour, form, and composition. To bring a very high level of realism to the model, an eye for detail, scale and visual skills are also needed.

This job requires a lot of precision, attention to detail and creativity. A 3D rigger forms the skeleton of each object in an animation using computer software. The series of bones they create help animate certain parts of the object.

This job includes applying lighting to the animation to make it look like the real world. Sometimes it requires including a secondary virtual light to amplify a character or object in the given scene. The skills of a good lighting artist include how a texture interacts with light and how a material can be specular or diffuse.

This job is all about stylising the characters, object and environment of the animation. A rendering artist makes the changes necessary to achieve a realistic final look.

This job includes post-production animation. A compositor, along with FX artists and lighting director, work together to make the final project.

What salary can you earn after a 3D animation course?

After a course in 3D animation from a recognized institute like APS, you can earn as much as 8 lakhs a year. That said, the salary differs from position to position, company to company and on experience.

Keep in mind that as you gain more experience and work for well-known companies, the pay rises to a very tempting level.

If you liked this beginners guide to 3D animation and want to know more about how to get started, get in touch!