we respect your privacy!
Home Arena Animation India’s Gaming Industry Is Set To Take Off And Create Jobs For... 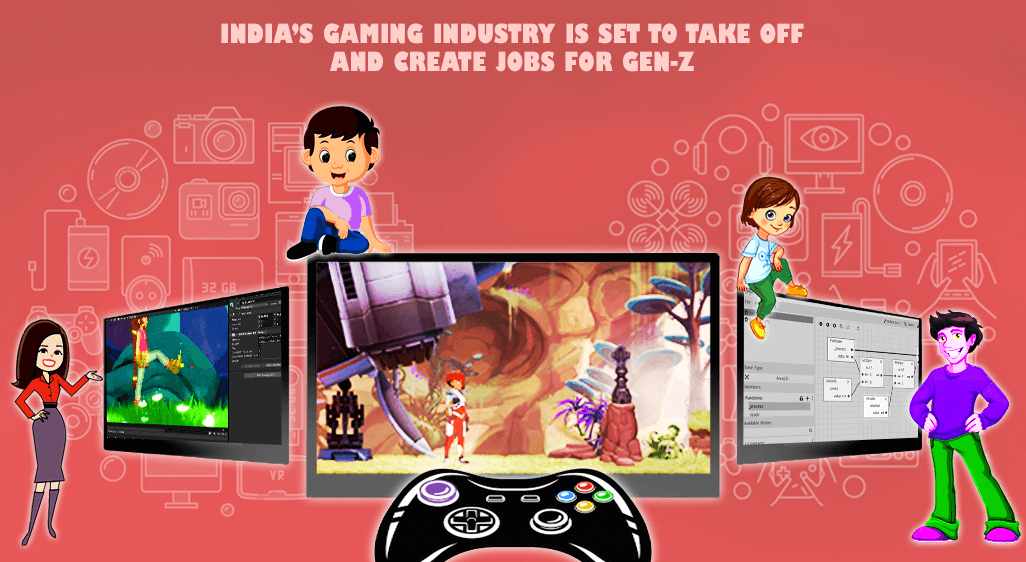 The epidemic, which resulted in multiple lockdowns and limitations, has altered the landscape of India’s gaming industry, which is now one of the world’s leaders. The internet usage rate in India is believed to be 30%.

Anxious until the Covid-19 outbreak broke out two years ago, Indian parents from all walks of life warned their children to stay away from video games. It was regarded as a controversial topic at the time. The Karnataka High Court recently overturned revisions to the Karnataka Police (Amendment) Act, 2021, which were aimed at outlawing and incarcerating involvement in online games, which came as a huge relief to the country’s $930 million gaming industry.

The gaming industry is currently seen as a significant economic pillar. This new industry has the potential to produce tens of thousands of employees in the country. Several gaming startups are likely to finalize employment plans in the next years to support expansion. With approximately 560 million internet users, India is the world’s second-largest internet consumer. In India, mobile phone users account for 85% of the market, with PC users accounting for 11% and tablet users accounting for only 4%. According to the World Economic Forum, mobile is the key vehicle for India’s gaming sector, with the availability of inexpensive smartphones increasing at a rate of 15% per year for the previous five years. Furthermore, high-speed 4G internet access, aided by the world’s lowest data tariffs, has made a significant contribution.

In a poll conducted by an AdTech company, approximately 45% of India’s mobile users began playing games on their cellphones during the epidemic. According to KPMG research, India’s online gaming population grew from around 250 million in 2018 to almost 400 million by the middle of 2020. It has been continuously increasing in value over the previous five years and is predicted to triple in value by 2025, reaching $3.9 billion. As per Statista, the market value of the Indian gaming industry was over 90 billion INR in the financial year 2020. Also according to the research, the market value is anticipated to reach 143 billion INR by 2022. Additionally, as per the conclusions of the Livemint research, Covid-19 was another reason why gamers were drawn to online gaming platforms. People in a certain age range (21-35) were more likely to search for amusement and moneymaking possibilities during lockdown since there were no or few recreation choices accessible.

Investors To Benefit from the Union Budget

The gaming sector reacted positively to the union budget, which was presented to Indians in early February, with investors applauding Finance Minister Nirmala Sitharam’s announcement of intentions to establish a Visual Effects, Animation, Gaming, and Comics Promotion, Task Force. As the news has spread, investors have focused their attention on the government’s role in the development of the AVGC industry in the country. “With the union budget stepping in for gamers, coupled with the evolution of 5G network, high-speed internet connection, improved graphics, and fantastic interface, the gaming industry will be taken to the next level,” stated Mr. Rajiv Kumar, the national head of HappyLuke, in an interview. “We are new to the sector, but we immediately saw how enraged and enthusiastic people are about online gaming, much as they were when video games like Mario, Contra, and others first hit the market.”

Critical Aspects for the Indian Gaming Industry in 2022

India’s gaming sector, believe it or not, is accelerating. Let’s take a look at some of the elements that will enhance the Indian gaming sector this year to learn more.

Indians have begun to take gaming seriously after the introduction of real money gaming. Games are no longer merely a source of enjoyment for them, but also a source of revenue.

The recently released union budget, which was revealed by the finance minister, is expected to increase employment by creating more jobs in the country for people.

The gaming industry has provided possibilities for gamers to monetize their passion and expertise as more individuals are drawn to online gaming, particularly real money gaming. Players may use their talents to play and win highly competitive cash prizes.

Individuals used to watch web series, listen to music, watch TV, and so on for pleasure and leisure. People are calmer and stress-free as a result of accessible mobile gaming alternatives and greater broadband services.

Selecting a Profession in the Online Gaming Industry in India

Over the last several years, many individuals have turned to games as a source of shelter and stress release. Commercial gaming has become one of the most profitable sectors in the world since the 1980s. The world of online gaming has grown to be so vast and varied. It encompasses a wide range of gaming platforms, genres, franchises, and titles. With the advancement of technology, the popularity of gaming has grown even more. And in the most part, gaming is regarded as totally harmless and delightful leisure that can be used to take a break from the harsh strains and reality of daily life. Nevertheless, gaming does not simply benefit society in this way.
Gaming has once again risen to become one of the most profitable industries on the planet. It has created not just billions of dollars in income, but also innumerable employment and career prospects for individuals all across the globe. People may now make a living by working in the game industry. The industry is, in reality, as open as it has ever been. If you’re enthusiastic about gaming and want to turn your pastime into a job, there are a variety of options available to you. Here are some of the most promising job openings in the gaming sector.

Any game that is released into the marketplace is regarded to have been designed by a game designer. The task of a game designer is to create the full gaming universe that is contained within a game. They’re in charge of big picture concepts, stories, graphics, and all of the other broad frameworks and ideas that go into making a good game.

A game developer is required to have a strong background in computer science. The game developer’s primary responsibility is to use code to bring a game designer’s concept to life. In many ways, the quality of the gameplay hinges on the ability of a game developer to make sure that everything is running smoothly and that the game doesn’t have any hitches in terms of performance.

When individuals become so engrossed in their gaming sessions, they forget how important audio is in deciding the game’s quality. Consider first-person shooter games like Battlefield or Call of Duty. If gunfire and footsteps didn’t follow the universal rules of physics, the game would be a complete flop. The sound designer and audio engineer are in charge of ensuring that the audio content of the game matches the graphics.

Another exciting job opportunity in the gaming business is that of a game reviewer. These are individuals who make a livelihood by playing and reviewing video games. They accomplish this in several ways. Some people work as gaming critics for major gaming publications or journals. Other freelance critics have private vlogs or YouTube accounts where they post their information. Within gaming firms, some in-house critics operate as testers and are in charge of ensuring that the final product is fit for mass consumption.

Finally, you have the option of becoming a game actor or a host. A large bulk of today’s games include playable characters with speaking roles or voices. You may work as a voice actor for a video game character. There are also some online games with live events, similar to those found in an online casino. These online casinos provide live dealer games in which actual people play against each other. They are the event’s hosts and are essential to the overall gameplay experience.

When it comes to the many occupations available in the gaming business, we’ve just begun to explore. There are a plethora of additional job pathways that intersect with the gaming business and are more focused on finance, marketing, and operations. Given the affluent nature of the sector, it should come as no surprise that many individuals are interested in working in it. It’s a fantastic method to turn one’s hobbies into a job.

Aspects That Will Increase Interest in the Online Gaming Industry

There’s no doubt that technology has been instrumental in propelling the online gaming business ahead. For the sake of player delight, the industry has always been aggressive in embracing new technology. Regulations, security, transparency, and player needs are all poised to see a big increase in players’ lists for organizations that stay up with technology innovation.

2. More Gamers Are Attracted to a Money-Making Option

Mobile gaming, low-cost internet, and digital payments have piqued the interest of a sizable Indian population. As responsible gaming becomes more prevalent, users have recognized that online games are secure, low-risk, and extremely rewarding. All of these variables point to a significant increase in the sector this year and in the future.

3. The offering of a Wide Range of Games

As the number of online games grows, stakeholders are competing to provide better and more gaming alternatives. Other sites are feeling pressured to keep up with sites like HappyLuke, which provides a diverse range of games, engaging promos, and huge payouts.

The Indian online gaming sector, like the rest of the globe, is undergoing rapid growth and change. The networking component among players is becoming increasingly prominent in the aftermath of social platforms and multi-player games. With the market gaining traction and showing no signs of slowing down, industry stakeholders must be aware of all industry developments to provide the best for players and their growth.