we respect your privacy!
Home Arena Animation Everything You Need to Know about Metaverse 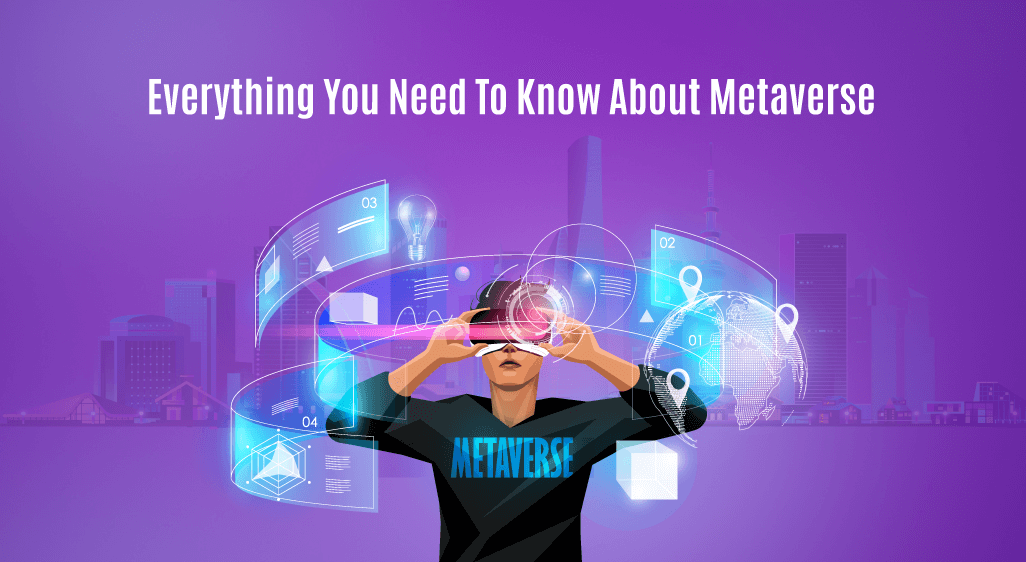 It’s difficult to comprehend the metaverse as that doesn’t exist yet. With big tech firms like Epic Games, Nvidia, Microsoft, Intel, and Facebook (“Meta”) won’t quit speaking about it, a language for describing the next edition of the internet is forming. Facebook, Microsoft, and a slew of other corporations are vying for control of the next generation of the internet: Metaverse!

You’ve likely heard rumblings that the metaverse is about to change your life. The metaverse refers to digital realms where people will meet to work, play, and hang out. It is a concept for the next generation in the internet’s growth. Some of those online places will be immersive 3D experiences that will necessitate the use of special eyewear. Others will take place on a computer monitor. The phrase has been developing and rebranding itself, and it will continue to do so. Buzz waves in technology come and go. The metaverse may die out before it’s ever realised. However, interest in the project is still growing. It’s become a popular term in gaming, NFTs, and retail industries. Microsoft’s projected $69 billion acquisition of ActivisionBlizzard was portrayed as part of a metaverse extension. Last year, Facebook relaunched as Meta, indicating the social network’s desire to be a forerunner in the new world. Roblox and Minecraft, as well as other global games, are all thrown into conversations about what the metaverse is or will be.

For decades, the moniker “metaverse” has been tossed around. The technology ideas that underpin virtual reality, augmented reality, and 3D computing are all rather ancient. The present surge of interest is only the most recent high in a years-long effort to make these advancements accessible to the general public. What’s evolved is a switch in mindset, a sense that the internet has to be reimagined. How far-reaching such adjustments will be is anybody’s speculation.

After all, the metaverse’s road plan is just half-completed. It’s unclear whether it will be completed on time. What is clear is that large firms will engage if there is profit to be gained. Qualcomm, Nvidia, Valve, Epic, HTC, and Apple, in addition to Microsoft and Meta, are also working on new methods to connect online.

The metaverse, however, is a porous idea. It’s generally defined as online places where individuals can interact, work, and play as personas, and it’s an advancement of the internet. Those places are shared and constantly available; unlike a Zoom call, they don’t vanish once you’ve finished using them. Many people claim that the metaverse currently appears in the virtual worlds of Roblox, Minecraft, and Fortnite, which facilitate interaction in two-dimensional environments. The original metaverse is Second Life, a nearly two-decade-old social and game platform. Facebook CEO Mark Zuckerberg, Microsoft CEO Satya Nadella, and other supporters envision a more authentic experience that combines a variety of existing technology, including virtual reality headsets, mobile devices, personal PCs, and cloud-connected servers. These futurists envisage the creation of a 3D virtual environment that can be accessed through the use of a headset or augmented reality glasses. There’s no agreement on whether you’ll need virtual reality or augmented reality to enter the metaverse, but they do go in tandem. That means these headsets will work with what’s available. Meta, Sony, Apple, and possibly others are anticipated to release new VR and mixed reality headsets this year.

One recurring idea is that the metaverse will be a virtual realm that mirrors our real-life existence. Either in a single virtual environment or across multiple, digital communities, parks, and clubs will arise. Some individuals believe there is a metaverse that exists alongside the actual world and contains augmented reality overlays. Investors are already splurging on virtual land tracts. Barbados has expressed interest in establishing an embassy in the metaverse, demonstrating the popularity of the premise. Some experts doubt that the metaverse will be everything that Zuck and others claim. Many people point to the bulky headsets that will be required to reach the metaverse’s most fascinating areas. The Playstation’s creator described them as “just irritating,” while a top Meta executive described his company’s headgear as “wretched.” They claim that Big Tech still has to find out how to stop bigotry, ignorance, and harassment on the internet. Getting hold of such issues in an even more unconstrained atmosphere, critics believe, will be difficult.

Will, There be Single or Multiple Metaverses?

That will have to wait and see. There are no metaverse standards, and many firms are pushing to build the basis for others to follow. Facebook, Microsoft, Sony, Epic Games, and several smaller firms are all working on projects to gain a competitive edge by being the first to market. It’s unclear if a VR headset from one business will work with another’s large multiplayer world or cloud-based visuals. The majority of companies provide a metaverse where other companies can join.

They must, meanwhile, decide on how they might work together.

Interop is critical, according to Meta, which aims to invest billions in its metaverse initiatives. One should be able to utilise your Facebook avatar on a Microsoft device as well. This points to a unified metaverse. If you try to transfer a skin purchased in Fortnite to another platform, you’ll quickly discover that the add-ons are locked to the gaming experience. The concept of a unified metaverse enabling services from a variety of enterprises harkens back to the early internet’s idealistic goals. All bets were off, however, when the early pioneers discovered how much money could be earned online. The metaverse will most likely be the same. If Zuckerberg and others are correct, corporations will be putting too much money on the line by allowing customers to pick up and relocate.

Our best prediction – and it’s just that – is that the metaverse will begin as a collection of competing platforms, each claiming to be the metaverse. Consider a scenario similar to the early days of instant messaging, when services were scattered. However, over time, standards will evolve, and the major companies will eventually employ interoperable infrastructure, maturing into something like email protocols. With disputes between agreed-upon protocols and proprietary standards, content from a variety of organizations, and rival software ecosystems, the internet today functions in this manner.

The deluxe Metaverse – the one that requires a headset – is based on the concept of an immersive, 360-degree digital space. You’ll have the avatar that you can customise, as well as digital assets with titles that will most likely be stored on a blockchain. Some believe you’ll acquire digital land and construct online homes where you may entertain your pals (or at least their avatars). Although this may appear outlandish or crazy, betting on the value of digital land has already begun. Tokens.com, a Canadian firm, has invested over $2.5 million in Decentraland, a 3D world platform that is a spiritual descendent of Geocities or Second Life. In Decentraland, purchases are made with an Ethereum blockchain token.

Others see a more fluid encounter. Simpler metaverse experiences, like Roblox or Fortnite, are currently accessible. Those games aren’t as immersive as the metaverse Zuckerberg mentions, but they give you a good idea of what’s coming. All of the activities we do on the internet already point to how the metaverse may develop. There will be some gaming, Zoom telepresence, VR and AR splashing, and lots of social media. Expect a lot of effort to bring it all together in a way that’s enjoyable or beneficial.

Types of Equipment Required to Enter The Metaverse

To access the metaverse, Facebook wants you to acquire a headgear like the Oculus Quest 2. Not everyone believes the specific gear is required. It is dependent on your destination. Facebook wants you to buy an Oculus Quest 2 virtual reality headset. Although the device is self-contained and does not require a PC or gaming console to function, it will cost you at least $300. Other VR headset manufacturers include Valve, HTC, HP, and Sony, all of which operate with PCs or PlayStation 4/5. By the end of the year, expect additional headsets, some of which may link to phones.

AR headsets, which layer digital information on top of the actual environment and are far more expensive, are made by a few other firms, including Microsoft and Magic Leap. Qualcomm and other businesses are working on ways for AR glasses to interact with phones, albeit most of the applications are still testing or business-oriented. Snap’s prototype AR glasses, or spectacles like the Nreal Light, demonstrate how much work remains to make them a viable buy. You may also access existing metaverses from your computer, tablet, or phones, such as Roblox and Minecraft. Although it isn’t a complete journey, the success of these platforms demonstrates their desirability.

The Origin Of the Metaverse

In Snow Crash, a 1992 novel in which the central protagonist, a pizza delivery man, hangs around in a virtual online imaginary world, Neal Stephenson introduced the phrase. Ready Player One, a novel set in the Oasis metaverse and which inspired the creation of Facebook’s Oculus Rift, updated the concept in 2011. Linden Lab also produced Second Life, a virtual realm that debuted in 2003 and drew car firms, record labels, and computer manufacturers to construct digital colonies. After an initial surge in popularity, Second Life’s popularity decreased over time, though it is still active.

Metaverses have been described in games like Minecraft, Roblox, and Fortnite. Fortnite has staged concerts, with musician Travis Scott and pop singer Ariana Grande performing, bringing attention to the already popular game. The Soundwave Series in Fortnite is global, with bands from Egypt, Mali, and Japan. Players can construct worlds in all three games, which is a key feature of the metaverse theory. Startup entrepreneur Matthew Ball, whose work on the subject has influenced Mark Zuckerberg, describes the metaverse as a “successor state to the mobile internet” and a “platform for human leisure, labour, and existence at large.”

A virtual counterpart of real-life people, places, and things exist in a mirrorworld, which is a digitally produced duplicate of the real world. Mirrorworlds appear often in science fiction, such as in Netflix’s Stranger Things, The Matrix film series, and Ready Player One, a novel and film. The metaverse might be a mirrorworld that perfectly reflects the actual world, or it could be a completely made-up world like one seen in a video game.

The strange word simply implies that virtual elements will be made to seem like real-life stuff. The metaverse may resemble the actual world in that it is frequently connected to our reality’s physics and designs, but it does not have to be exact.

A digital twin is a computer-generated replica of a real entity or structure. Digital twin technology was initially utilised by NASA to perform simulations of space capsules in 2010. It was first introduced in the 1991 book Mirror Worlds by David Gelernter. Microsoft has emphasised the significance of digital twin technology in the creation of the metaverse.

In a virtual environment, your avatar is your persona. This digital representation of your face may resemble you, resemble a cartoon (as Snapchat’s Bitmoji and Apple’s Memoji have popularised), or appear as fantastical as Fortnite’s “skins.”

We’re redefining “virtual” after two years of a pandemic. No one has yet perfected how the future will seem. However, a reconsideration of what it means to congregate online and in large numbers is in the works. And there are a lot of individuals who want to interpret it.