we respect your privacy!
Home Arena Animation Consider These Unconventional And Lucrative Career Options After 12th 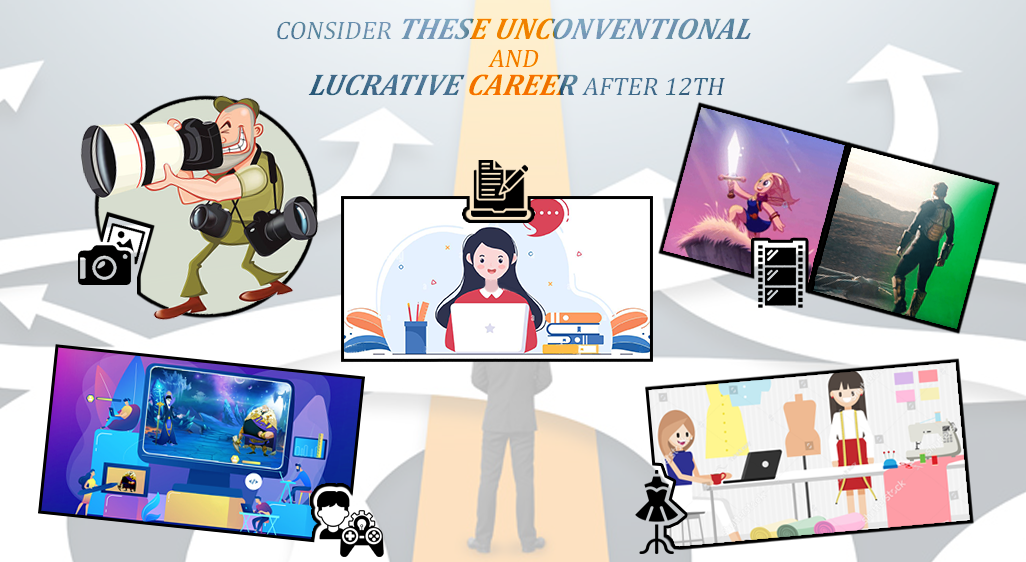 Have you ever considered that one of your passions or hobbies could be a viable option for a full-time career? The era when parents would encourage their children to pursue a career in science or commerce after graduating from high school to prepare them to become future doctors, engineers, lawyers, etc. is long gone.

From the day a child starts attending pre-school, most Indian parents look forward to the day when he/ she would start going to an engineering or medical school. There is nothing wrong to expect that your child lives a flourishing life you’ve always wanted them to live when they grow up. Yet, we often tend to overlook the child’s interest or inclination toward any other profession apart from engineering or medicine – because of a common myth that we have lived with for ages…. No other profession pays you as much as the mentioned two. Parents devote their life savings to seeing their children acquire engineering or medical degrees. They believe that doctors and engineers get much better employment and earnings opportunities. But it’s high time that parents pay attention to important global statistics before pinning all their hopes on the aforementioned professions.

The USA has an economy worth $16 trillion and produces only  1 lakh engineers annually. Yet with only a $2 trillion economy India delivers 15 lakh engineers every year. Manufacturing was the preceding mass hiring sector for Indian engineers. The main areas were electrical, mechanical, and civil engineering. However, with 17% of the GDP, manufacturing is comparatively sluggish in the present day. As a result, placing the core branches of engineering is now quite challenging. The IT industry was the most recent mass recruiter. In a short amount of time, it went from being nothing to roughly 5% of the GDP. Millions of engineers started to work in IT. Currently, the IT sector is saturated and there’s a demand only for expert IT professionals.

When it comes to the sectoral composition of the Indian economy, most of the sectors do not require engineers. Tourism contributes 10% to the GDP and doesn’t need engineers. Engineers are not needed in the financial industry, trade, hotels, or restaurants. In the fields of agriculture, education, and health, engineers are also not particularly needed. Engineers play no part in more than half of the GDP. Still, the majority of young Indians pursue engineering degrees. The current state is not sustainable. Supply is abundant and demand is limited. In addition to this, the ordinary engineer has subpar skills—in some cases, none at all. Most newly graduated engineers don’t know what they studied if we exclude the top 100 universities. Today, engineers work in fields unrelated to what they studied in college. This is a waste of time and money. A degree in engineering is not inexpensive. It costs between 10 and 15 lakhs. When an Indian middle-class parent’s son or daughter is unable to get a job, they are saddened.

You can determine the loss for the entire country. The NASSCOM estimates that there are 1 lakh employable Indian engineers. The remaining 14 lakhs have squandered a total of 10 lakhs in fees. That comes to almost $20 billion in total. Nearly the same as what the government spends on healthcare. A loss of human capital results from this. The entire system of engineering education in India has to be redesigned. Government must reduce the number of colleges while raising the standards of the remaining ones. Students should consider alternative job paths than becoming engineers.

There are numerous options accessible nowadays for professional courses – from aviation to hotel management, short-term programs to major film production courses, data science, cyber security, information security, cloud technology design, animation and VFX, digital marketing, film making and more. Let’s discuss what “unconventional careers” mean. The general public may not always support unconventional occupations. The most unconventional job possibilities have gained appeal and are now in high demand. Below are some unique and unconventional career options that someone who dares to dream and be different might consider after class 12:

The need for well-written, succinct, and insightful content is enormous. Written content, both textual and graphic, dominates today’s commercial and social networking platforms. Over this, there will be a significant need for content writers, making this one of the greatest unusual employment alternatives. The freedom from predetermined guidelines and requirements is the best aspect of being a content writer. The already well-known social networking site has become indispensable in modern society in the wake of the 2020 pandemic. Future generations will have an insatiable need for excellent web content. Nothing is stopping you if you have a knack for writing and the creativity to experiment with new formats like websites, copywriting, scriptwriting, and so on. Whether you work as a freelancer who operates from home at your convenience or a corporate company writer, the market for your profession can only expand. A degree in content creation does not exist. Of course, there are credentials, but what matters most is your drive to master the craft.

A job in animation and VFX has emerged as one of the most lucrative in the modern era due to the growing domination of technology. Animation, which is the process of giving an image the appearance of movement by rapidly alternating between static images, is no longer just for children’s television shows. The use of graphics and software, however, to produce visual effects for movies, advertising, video games, online educational programs, mobile devices, and other types of media have greatly grown. Those who love to make magic have countless opportunities in the animation profession. Even though this style of art was introduced in India later than it was in other industrialized nations, it is still growing and is poised for a protracted era of prosperity. There is a significant need for competent experts both in India and overseas. After finishing a certificate or certification program, an individual who wants to become an expert in such computer graphics should pursue a bachelor’s degree in animation and VFX.

Click here, to learn more about the best programs in Animation & VFX at Kolkata.

It felt as though I was immersed in a fascinating universe with only that adorable figure, “super Mario,” as my sole friend while I controlled the game joystick to guide Mario to its objective. The actual joy of childhood was that. Everyone’s go-to leisure activity of choice has always been playing video games. There are currently as many different types of video games as there are individuals.

Mobile gaming is now the market area with the quickest growth thanks to the popularity of smartphones and iPads, which provides a plethora of jobs for game designers and developers. You will play a crucial part in the design of the game’s characters, theme, rules, stages, riddles, graphics, and animation as a game designer. Take action now to enter this multi-billion dollar sector where there is room for you to use your ideas and originality.

Arena Animations Park Street is one of the premier institutes that offer a range of programs in game designing and development.

When a buddy identifies you as the “PC” (Picture Credit) for a stunning photograph that you took, it’s like winning a major prize. You feel proud whenever your talent is recognised in any manner. Therefore, if you possess a creative vision and vivid imagination, why not cultivate this gift and make it your profession? You only need to practice and be persistent to succeed. Additionally, a solid technological foundation supports the creative side. Digital photography has evolved into the contemporary manifestation of this art form as a result of the quick development of communication networks, the explosion of the advertising sector and media communications, as well as the fashion boom. Adventure photography, wildlife photography, wedding photography, fashion/beauty photography, and many more are among the various career opportunities in the area of photography. What could be better than converting your favourite activity into a career that allows you to make money while having fun?

The skill of creating apparel and accessories for daily use is known as fashion design. The haute couture of today is a far cry from the designer garb worn by the crowned heads of antiquity. One of the most profitable, alluring, beautiful, and thrilling job paths that offer gifted individuals the chance to get brand recognition, notoriety, and a respectable income is fashion designing. One can create a clothing store, a network of designer clothing stores, or a boutique in addition to designing outfits for exhibits, ramp shows, and famous actors. So, if you can work magic with colours, forms, and designs, enroll in a professional program to launch a lucrative career in the alluring and captivating field of fashion designing.

Unconventional professional options can bring about a variety of difficulties but also great success and satisfaction. People who choose to pursue a profession in an uncommon field typically feel significant personal satisfaction in their job. Choosing when and where to work is frequently an option for individuals in unconventional jobs, enabling them to achieve the optimum work-life balance. Put an end to the practice of choosing the ostensibly high-profile professions of engineering, medicine, or management studies. The moment has come to follow your heart’s desires, look beyond the boundaries and discover any hidden talents that you were unable to share due to the pressure of choosing a vocation that would please society.

A Quick Guide To The Differences Between UX And...

A Quick Guide To The Differences Between UX And UI Design