we respect your privacy!
Home Arena Animation What is Memphis Design and why is it trending? 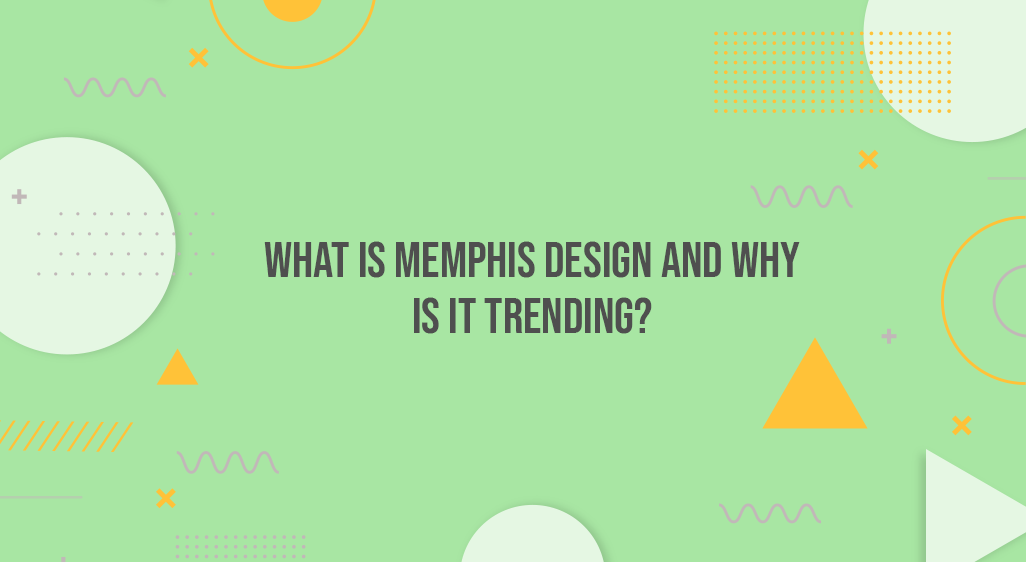 One of the more historic and culturally significant cities of the southern United States, the city of Memphis played a prominent role in the American civil rights movement and was the site of Martin Luther King Jr.’s 1968 assassination. The city now hosts the National Civil Rights Museum – a Smithsonian affiliate institution.

The first European explorer to land on the area of present-day Memphis was Spanish conquistador Hernando de Soto in 1541 with his expedition into the New World but modern Memphis was founded in 1819 by three prominent Americans: John Overton, James Winchester, and future president Andrew Jackson. It expanded into one of the largest cities of the Antebellum South serving as a market for agricultural goods, natural resources like lumber, and the American slave trade. After the American Civil War and the end of slavery, the city witnessed even faster growth into the 20th century as it emerged into one among the largest world markets for cotton and lumber.

But what has all this got to do with design in general?

Except that in 1966, Bob Dylan composed a song titled “Stuck inside of Mobile with the Memphis Blues again”, which struck a chord with a group of Avant Garde designers. Their leader was Ettore Sottsass, who founded the Memphis Group on December 11, 1980 after the song was played at the group’s inaugural meeting.

But who was Ettore Sottsass? In short, he was an iconic figure in design history.

Born in Austria, Sottsass grew up in Italy and graduated in 1939 with a degree in architecture. After serving his time in the military, Sottsass opened his own architecture and design firm in Milan, Italy, where he began designing furniture and experimented with different colours, patterns and shapes.

In 1956, Sottsass was hired by Adriano Olivetti as a design consultant for Olivetti. His job would be to design electronic devices. He went on to develop the first Italian mainframe computer. While working here Sottsass earned his reputation as a designer who, through his unique taste in colour, form and styling was able to establish office equipment into the realm of popular culture. Sottsass then got together with Perry A. King. Together they created the typewriter Valentine in 1969, which became a milestone of the 20th century.

While continuing to design for Olivetti in the 1960s, Sottsass also conceptualised a variety of objects which became statements of his personal experiences while he was travelling in USA and India. These objects included large altar-like ceramic sculptures and his “Superboxes” that encapsulated radical sculptural gestures presented within a context of consumer product, as ideas translated into design. Presented as bold, colourful, simulated custom laminates, they served as precursors to Memphis, the movement, which would follow almost a decade later.

Then on December 11, 1980, Ettore Sottsass took the bolder step of founding the Memphis Group, the name derived from Dylan’s song. The group, active from 1981 to 1988 was an act of defiance; a conscious protest against the 1970s minimalism with its fixation on structure and straight lines.

As a deliberate deviation from the norm, Sottsass guided the group’s thinking around “radical, funny, and outrageous” – essentially moving away from what was acceptable as “good taste” at that time. Themes like Art deco, the colour palette of Pop Art and Kitsch themes from the 1950’s was what inspired the group. Colourful laminate and terrazzo therefore found their way into floors, tables and lamps. Another predominant design feature was the Squiggles, also known as the Bacterio print for which Sottsass drew inspiration from the surface texture and form of a Buddhist temple in Madurai, India. He then created abstracts of this detail into Squiggles he named Bacterio, which he used as veneers and textiles on furniture designs. Typical shapes were also rejected in favour of multi-coloured objects. For example, chair legs, instead of being rectangular, would often be circles and triangles.

The Memphis Group debuted in the year 1981 at Salone del Mobile of Milan, a renowned furniture fair. Though they grabbed eyeballs in their very first launch, their design principles were deemed too whimsical and hence rejected commercially. Instead what they did was to attract a cult following. Designer Karl Lagerfeld became so enamoured with the freshness of the ideas that he bought the entire collection, and later when David Bowie’s estate auctioned his art collection in 2016, it was found that the singer had collected more than 400 pieces from the movement since the ’80s.

Moreover, irrespective of its fringe status, Memphis did enter the mainstream impacting pop culture in a most memorable way. American TV sitcoms such as Saved by the Bell and Pee-wee’s Playhouse used the aesthetics of Memphis Design on its sets.

Memphis design was mainly applied to the furniture and certain other design objects right until 1988 when the group officially disbanded; Sottsass had left long before in 1985.

Postmodern, collaborative, bold, brash, unconventional; Memphis design evoked different reactions from different people; one thing however stood out; furniture was no longer functional; it could hold ground as a highly decorative piece of beauty. The group made fun of everyday pieces turning them into admirable works of art.

Ground-breaking in itself, Memphis stood on its own choosing to be different from the overly elegant and serious design ethic of the 1970s. It again made an entry in 2005 when the design house LACMA presented a survey of Sottsass’ designs one year before he passed away. The interest in Memphis began to grow and in 2014, Nathalie Du Pasquier—a founding member of the group designed a collection of patterns for American Apparel.

Soon after in 2017, Memphis made its big break with the big box retailer West Elm, which debuted a series from contemporary Du Pasquier-inspired brand Dusen. Memphis Design continues to be influential throughout the world and can be seen in the Art Institute of Chicago, the Design Museum in London, The Museum of Modern Art in New York and many others. Though viewed as controversial at that time, their ideas were later recognized and have now become widely recognized and appreciated.

And, we’re guessing Bob Dylan must have been mighty happy he wrote the song.

If you want a fresh approach to design, get in touch with our expert team today.

The Importance Of Hero Image In Graphics Design