we respect your privacy!
Home Arena Animation Unity vs Unreal Engine – Which Is The Best Choice For Game... 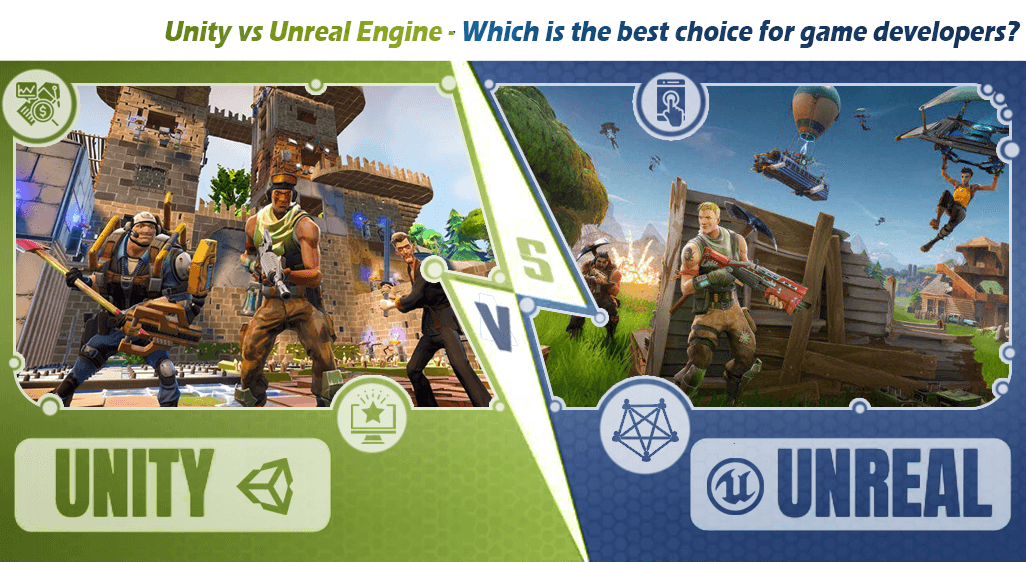 Unreal and Unity are game engines. They offer a software development program. They also enable you to develop games for Android, iOS, Linux, Windows, and Mac. For new upcoming game developers, we will provide a comprehensive guide that will help you choose between Unity and Unreal Engine.

Unity was released in the year 2005 by Apple Inc’s WDC. Unreal Engine, on the other hand, was introduced by Tim Sweeney, CEO and founder of Epic Games in 1998. Nowadays, these are two main game engines. A game engine is also called a game frame and game architecture. It is a major component in game development. It has several game elements like AI, 3D, graphics, and sound in the game-making framework. It offers an environment for software development that enables developers and designers to build video games. Both engines allow game development for PS4, PC, Wii, and Xbox. It helps you to develop games for iOS, Android, Linux, Mac, and Windows.

Factors To Consider Between Unity vs Unreal Engine

Unity and Unreal Engine are both game engines. However, their application differs for different purposes. Apart from such common facilities, both game engines come with unique features that make them distinguishable from each other. These differences help professional game developers to determine their choice. We have listed below some features that will allow you to decide between the two.

Unity is designed originally to run on different devices such as phones and consoles. It helps you to make complex projects for certain low-end devices and does not need a strong PC setup. Unreal works for high-end devices.

According to Statistics, most game developers prefer Unity over Unreal. Unity is a better choice for game developers with smaller groups and Unreal requires a larger group of game developers for those who are working on different parts of the entire project.

Both engines can offer high-quality VFX. However, Unreal Engine performs better in comparison to Unity. With good photorealistic visualization. The Unreal Engine puts gamers into another world of their imagination. That is why game developers prefer it more than a game-making of high definition.

Unity does not cost much. Several independent game developers, therefore choose it over a royalty-based plan. But, other game developers go for the five per cent royalty in turn of Unreal Engine’s extraordinary performance and features.

After the release of Unity in 2005, video game development has become accessible to a broad range of game developers. One of the many reasons why Unity has so many game developers, gaming companies, and members is that the language code is intuitive and easy to learn. Unity 3D also offers a large number of assets that make independent game developers prefer it over others.

Unreal Engine is known for its photorealistic quality and graphics. It is why it is known as an AAA game engine and it represents studios that make successful games all over the world. Unreal Engine became popular among different game development companies because it enables them to realize the vision they have for their video games. With the help of Unreal Engine, they can complete almost anything that comes to their mind.

Unreal is the leading industry for graphics. The game engine is well-known for its ability to offer cutting-edge graphics. It has ready-to-use tools that they can customize quickly. Lens flares, volumetric lights, and post-processing are some of the main examples. Unreal Engine also gives game artists accurate shadows and lighting with a finished aesthetic and smooth falloff.

Unity 3D is preferable for good visuals. But it usually takes longer and you may not be able to achieve the same quality level. Though it leverages lighting cutting-edge technologies such as GI or PBR, it still lacks some shading details that Unreal defines. Unity 3D provides support to base textures, normal maps, and occlusion maps. But, it does not have a material editor similar to Unreal.

Unreal Engine is written in the form of which is a difficult language to master especially for beginners. However, one of the main advantages of Unreal is that it includes Blueprint, a visual programming system in which game developers do not need to be an expert in writing codes. Unreal Engine’s Blueprint and visual scripting system are one of the main reasons why it is one of the best tools for iteration and prototyping. In Blueprint, you have drag and drop nodes and adding wires feature to add logic and connect them. Such a node-based interface helps designers who do not come from a technical background to explore ideas without requiring to know how to code.

Unity 3D is one of the most accessible game development platforms because of its use of the C++ programming language. Unity is the primary choice for game creators. This is because it is easy to utilize and learn. It has a straightforward architecture and user-friendly interface. For instance, from July 2020, Unity has included the Bolt visual scripting tool in all Unity plans. With continuous updates, it becomes comparatively easier to use. It allows users to avoid code as much as possible.

Unity vs Unreal Engine are two different game engines. Though they are mostly similar, there are some major differences between the two. For instance, Unity 3D uses the C++ programming language. It is the preferred choice among most independent game developers. However, some game developers and beginners find it hard to master. That is why they prefer Unreal Coding over Unity 3D. On the other hand, Unity avoids coding which Unreal does.

As per device usage, Unity does not need a powerful PC setup. But, Unreal requires such a setup and works with high-end devices. A small group of game developers use Unity while larger groups of game developers choose Unreal for its premium features.