we respect your privacy!
Home Arena Animation The Top 10 Animated Movies Of 2022 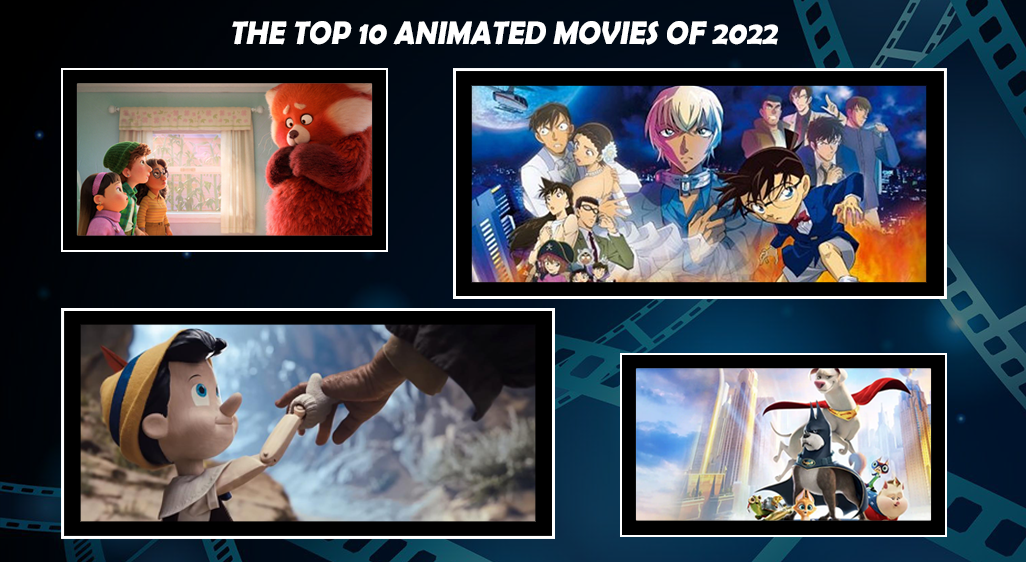 The year 2022, is about to come to an end, and has been a great period for animated films. Numerous animated movies have previously received brownie points from IMDB users and are recommended for repeated viewings. Family-friendly and less family-friendly animated films were mixed this year. Interestingly, both on OTT platforms and on the big screen, each of these films has enjoyed great success. Web series watching in the convenience of your own home has become simpler thanks to streaming options. Join the top animation course in Kolkata if you have a similar desire to one day create an animated film.

Let’s discover more about the best-animated films that made the top 10 list based on both their merit and viewer preference. In addition to this, you can access a variety of animation courses to support your career as an animator.

This film would be a great way to pass the time if you’ve been missing the Bob’s Burgers television show. You get to watch an animated movie for adults that is appropriate for families on a big screen. Due to its originality and scenes with musical numbers, it was a huge theatrical success. It also contains fantastically grandiose plotlines, which you will adore. The public has been requesting the next instalment of every show because of the characters and the ideal duration of each episode. It has received appreciation from both critics and fans and is regarded as the ideal combination of graphics, lovely animation, and a valuable entertainment film.

According to IMDB, it has a score of 7.1 and is highly commended for its fantasy animation and entertaining plot. It centers on a young woman who sails a monster ship. Hunter’s amazing animation details are accessible on OTT channels like Netflix. Family-friendly comedy with amazing messages that are conveyed by the characters in each scene. If you are currently enrolled in an animation course in Kolkata, this is the ideal illustration that may aid with your skill development.

It has a 7.3 IMDB rating and is extremely related to the historical event of the first lunar landing. The animated movie is based on a young child’s viewpoint and vision of seeing the moon for the first time. It is a fantastic plot that also integrates historical facts and 1960s-era incidents from real life. It stands out from the competition due to the beautiful animation pieces. This animated movie is the first full-length rotoscopic animated movie, making it truly unique. We can categorize this animation as a new-age movie, and the entire creative team earns a standing ovation.

4. Beavis and Butt-Head Do the Universe

Do you recall the 1993 television series Beavis and Butt-Head, which aired nonstop? Simply put, this is a cartoon movie adaptation of the television show. All of the action takes place throughout the characters’ epic journey through time and space. The protagonists in this story are from the 1990s, but they must deal with all the contemporary conveniences present in the year 2020. In comparison to the program that had viewers glued to the screen for years, it has produced a meritorious impression. As a result, it had a successful comeback after a long absence and currently boasts a 7.1 IMDB rating. Joining the Best Animation Institute in Kolkata might help you if you’re interested in learning animation.

This animated film is the ideal choice if you want to see a coming-of-age story. It is a brand-new Pixar with a unique twist, and the plot revolves around the year 2002. Meilin Lee, a student in her eighth grade, is seen having to deal with a family curse in this scene. The curse even causes her to transform into a huge red panda, a representation of intense emotion.

It gets a 7.4 rating on IMDB and makes a significant impression on the audience. The most notable aspect of this film is that it goes beyond what most films would reconsider. Without question, the realism, sincerity, and ingenuity of this animation will keep you eagerly anticipating the next scene of the film. Why wait then? To participate in the animation industry and support its expansion, learn animation.

6. Minions: The Rise of Gru

Once again, the Minions from the Despicable Me movie series have shown that they are here to stay. Every fan acquainted with the franchise now favours the newest Illumination film, Minions: The Rise of Gru. It has been named one of Letterboxd’s top movies from Illumination Studios. This movie serves as a prequel to the Minions film, and it highlights the significance of Gru to the Minions. In this instance, Gru is depicted as a juvenile villain in the early days. According to IMDB, the film has a score of 7.0. Once you enroll in the Best Animation Institute in Kolkata, you can advance your talents to become an animator. These animations are simple to master.

This animated movie, which was made with the idea of the Super Pet, is a must-see if you love pets. Krypto the Superdog, the boss of the animals in shelters, is featured here. He unexpectedly develops incredible abilities, and to defend the world, he joins the Justice League. The canine is a superhero. The DC Universe has been expertly animated by the entire creative team.

Celebrity voices and animation sequences work perfectly together to make this movie enjoyable to watch repeatedly.

You must see this Sony Pictures Animation, which is a continuation of the Hotel Transylvania series if you are an Amazon Prime Video subscriber. When compared to the previous movie, this one features kinetically elastic animation, excellent comic timing, and much more enjoyable laughs. A Drac pack is the main character in the novel, and due to a scientific error, they were accidentally transformed into people. Additionally, it made its theatrical debut on YouTube, where it quickly became well-known. Join an animation course in Kolkata if you are passionate about how amazing animation films are made.

Do you recall the little wooden child whose nose grows longer with each lie? Robert Zemeckis recreated the 1940s classic animation this year. It is an adaptation of the original book in stop-motion that is currently available on Netflix. The entire plot is based on fascist Italy in the 1930s. Here, Del Toro is shown promising to transform the Carlo Collodi story into a more sinister and twisted version. Numerous well-known artists provide their voices to the movie, and the puppet, the product of flawless animation, gives the movie a fresh edge.

10. Detective Conan: The Bride of Halloween

When it comes to Japanese animated mystery program, the Detective Conan series has always stood out. Detective Conan: The Bride of Halloween, a fantastic addition to the film series as well as the continuation of the television show, has been released this year. It is based on the manga series Case Closed, which has been running for 30 years. The movie earned a tonne of positive reviews; it has an IMDB rating of 7.0.

Besides these, Chip ‘n Dale: Rescue Rangers, The Bad Guys, The House, and More were the movies that garnered a dozen views and made the audience desire to see more animations the following year. All of these have developed to serve as a constant reminder that animation films transcend all time frames, genres, and territorial boundaries. Therefore, to become a part of the industry and establish yourself as an animator, enrol in the top Animation Course in Kolkata.