we respect your privacy!
Home Arena Animation The Future Of AR And VR In Gaming 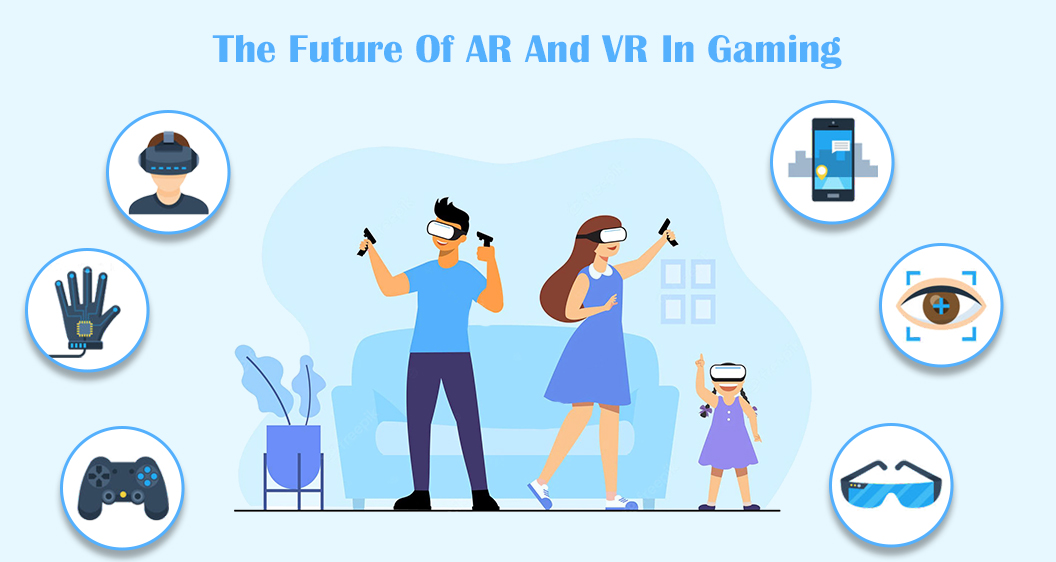 Augmented Reality (AR) and Virtual Reality (VR) have transformed a lot of aspects of our lives rapidly. Both have played a significant role in the world of gaming. Many people have started using AR and VR technologies to play new games on consoles. In this blog, we will see what the future holds for AR and VR technologies in gaming.

Augmented Reality (AR) refers to an engaging and immersive technology that enables users to interact personally with the digital environment. AR is the combination of audio content and game visuals in real-time to form an artificial environment. Users who participate in AR gaming on platforms on gaming systems, smartphones, and tablets can enjoy its engaging experience.

Virtual Reality (VR) is the technology that allows the formation of a simulated environment. This helps the users to make the most out of the artificial world. It allows you to interact and become a part of the 3D world as it enhances the stimulation of all sense organs such as hearing, touch, smell, and vision.

Video game creators help players to experience the world of gaming in a close way. They have done this by creating a believable environment. Augmented Reality (AR) and Virtual Reality (VR) make sure that players are engaged in the world of gaming. Because of this, these technologies play a key role in the gaming world.

Augmented Reality (AR) games like Pokemon GO allow the players to experience the game in the real world. With smartphones, players can view the reality in front of them with the help of technology. Players can explore the city and several new locations that they have never gone to before.

There are other games like Jedi Challenges that will urge players to wear a mask. You will be able to view virtual challengers and fight against them with a lightsaber controller. Through this game, you will get the chance to experience the world of Star Wars.

The Difference Between Augmented Reality (AR) and Virtual Reality (VR)

Many people think that Augmented Reality (AR) and Virtual Reality (VR) are the same things because they sound alike but they are quite different. Both AR and VR allow players to experience things that they would not have otherwise. However, they have certain distinctions between them that you have to keep in mind to use in gaming.

The future of AR and VR gaming is pre-given as it is constantly evolving with the wants and needs of the players. For this reason, game developers have to address the requirements of all players. AR and VR, therefore, have much to offer in terms of retaining the attention and attraction of the global gaming audience. That is why new games that are coming up these days appear more appealing to occasional gamers and avid players making them spend much more time.

New technologies like AR and VR allow players to have more fun. This makes them stand out from old games. It also expands the scope of gaming technology. The cutting-edge features also enhance the gaming space. Due to this, even old-school games are now getting renewed when paired with Augmented Reality (AR) and Virtual Reality (VR).

Virtual Reality (VR) games help players continually interact with each other. In comparison to traditional gaming, you need to present physically in one room. VR offers you several opportunities that allow you to become sociable. Players can connect and build their relationships in a better way.

Young people are now loving the world of online gaming. VR gaming allows people to enjoy gaming parties with their friends. Virtual Reality and video games are not mutually exclusive. Bringing both of these together can improve and provide players with better gaming applications.

Augmented Reality (AR) allows you to do things differently. It means that players are given a certain set of choices. That is why you can choose different kinds of strategies that will allow players to minimise their risks while playing games.

AR lets you play in a multi-dimensional space. For this reason, when you are in the real world, you can move forward and backwards, upside, and downside that you cannot do in a game.

1. A small base of users

VR gaming has a small base of users. Other than smartphone games, players need to buy a piece of special equipment for playing. As per Entertainment Software Association, in March 2021, among 169 gamers, only 29 per cent own a VR system.

Virtual Reality (VR) requires a high development cost. The hardware is not only expensive but also developers have to spend money on the creation of the content. In addition, gathering new assets is also costly.

Virtual Reality (VR) and Augmented Reality (AR) pose challenges that you have to overcome. But, slowly it will become more user-friendly which will gradually increase the user base.

Demand for AR and VR is starting to increase with time. According to Pixelplex, the market will go up to $570 billion by the year 2025. Hence, both AR and VR gaming will help the players to enjoy both the virtual and the actual realities together and eventually, they will become indistinguishable from each other.

The future of AR and VR is changing the scope of gaming. Both AR and VR provide you with an immersive experience that can completely change the world of gaming. Because of this, players will be able to interact and connect with other players.

The hyperrealistic way of gaming can provide you with more entertainment that will make the gaming experience more enjoyable. Moreover, you can adopt different types of strategies that players can use to minimise risks. Though there are certain disadvantages, the games will slowly become more user-friendly which will increase the gaming user base.

A Quick Guide To The Differences Between UX And...

A Quick Guide To The Differences Between UX And UI Design