we respect your privacy!
Home Arena Animation A Guide To The Game Development Process 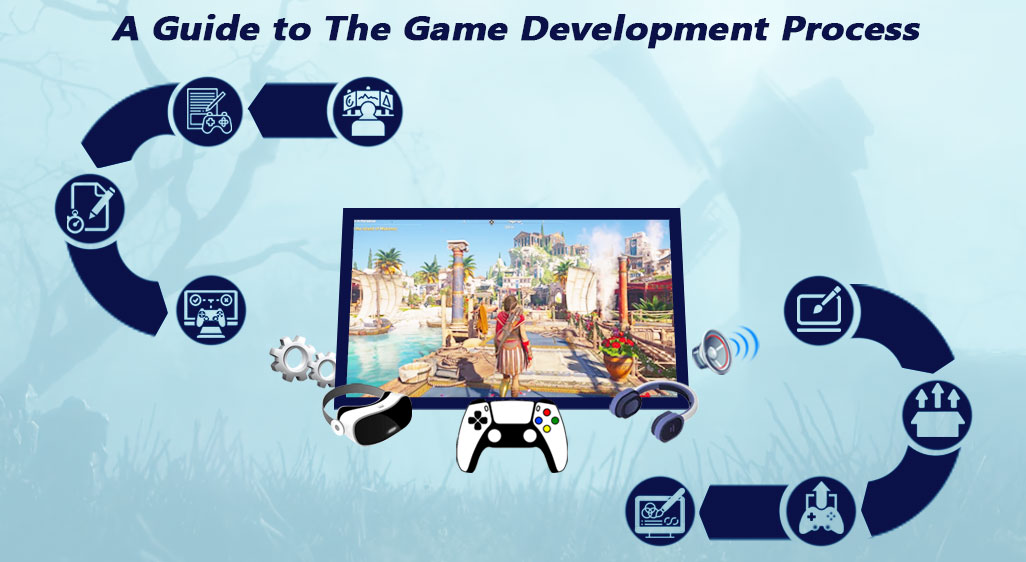 Most individuals who make video games for a job would tell you that it’s never a simple process. Game creators must maintain their fingers on the pulse of the business, which is constantly changing. For example, according to GlobalWebIndex, cloud gaming is on the increase; virtual reality is maturing, with PlayStation bringing the technology to mainstream gamers, and Valve recently published a AAA PC VR-exclusive project, which has sparked enormous attention in the market. However, what goes on behind the scenes of a well-crafted game? Burning deadlines, production bottlenecks and dependencies, stakeholder pressure, and constantly changing design and requirements are just a handful of developers’ numerous challenges. Most people are unaware of this crazy cycle and its many phases, so let’s understand the game development process.

Like any other endeavour, game development begins with a concept. The difficult aspect is turning this concept into a deliverable commodity. Here are the steps that are followed:

It’s the first stage in turning a concept into a game. The discovery stage determines the scope of a game and what is necessary to bring it to a release date. Depending on the project scope, resources required, and budget of the project, the discovery stage normally lasts a month or two. The Key team comprises only a few persons at this moment. A Solution Architect, Game Designer, and Art Director are normally on the Key Team. The discovery stage is an important part of the game development process, and it generally entails a wide range of actions, which are detailed below:

Designers construct a single document that contains all of the game’s rules and explanations, such as:

2. Concept Of The Art Style

Art Director and crew work on the visual style for the product, developing the aesthetics, look and feel in partnership with game designers and stakeholders.

The Solution Architect or Tech Lead determines the technological resources required for the development process at this phase.

When the team has completed the steps outlined above, we offer the following details:

The true development begins at this point. Members of the team refine the plot, as well as the game’s equilibrium, tempo, and playability. They also design all assets (characters, monsters, objects, and environments), establish game rules, construct levels and scenarios, and write the coding. Each aspect of the game, from the fun and gameplay to the characters, settings, items, degree of difficulty, sceneries, and more, must be carefully considered. Since the initial concepts don’t often translate well in practice, game testing and enhancement continue after the game is published.

Let’s take a look at some of the most important video game development positions, keeping in mind that small teams sometimes take on many duties. A larger studio, on the other hand, will have more team members that specialise in a certain facet of game production.

For quality assurance, every feature and mechanism in the game must be tested. A game that hasn’t been thoroughly tested isn’t fit for an Alpha release. During this stage, a QA tester could ask the following questions:

Game testers are available in many forms and capacities. Some of them put themselves through stress tests by repeatedly wrecking the game and colliding with barriers. Other play-testers assess the game’s “fun factor” to determine whether it is too difficult or too simple and comfy. The game should be ready for Alpha or Beta release after several cycles of testing, depending on how developed the in-game elements are. The players have their first hands-on experience with the game at this phase.

The release date is approaching, and one can see the end of the road. The months running up to a deadline are usually devoted to troubleshooting faults discovered during the testing stage. Apart from bug patches, developers devote as much time as possible to the game before it goes live. Perhaps that rock has deeper depth. Maybe the character’s attire might have more texture, or those trees could finally swing in the breeze. These small adjustments may have a big impact on how immersive a video game is.

It’s time to publish and distribute the game after it’s perfect.

After the game is released, some team members continue to work on it, fixing problems, creating updates, bonuses, in-game events, or brand-new downloadable content. Others may move on to the sequel or the next project. Video games are notorious for releasing a slew of small glitches. Teams detect and eliminate issues throughout the first several months after the launch. Players are also expected to submit bug reports or speak up in online forums regarding issues. This is all part of the post-release support.

Understanding the game development process is crucial if you want to build video games. Regardless of where you fit into the pipeline, understanding the purpose and hierarchy of each department can help you work more effectively and avoid costly difficulties down the road. In today’s gaming business, releasing new material is typical since it boosts a game’s repeat value, retention, and attractiveness. Feel free to contact us if you’re interested in creating a video game from the ground up or improving an existing one. Years of game development expertise enable the Arena team to provide competent and perfect products on time and within budget.

To know more about game development and various courses related to it call Arena Animations, at Park Street, Kolkata, today!