we respect your privacy!
Home Arena Animation A Career In Digital Game Art And Design 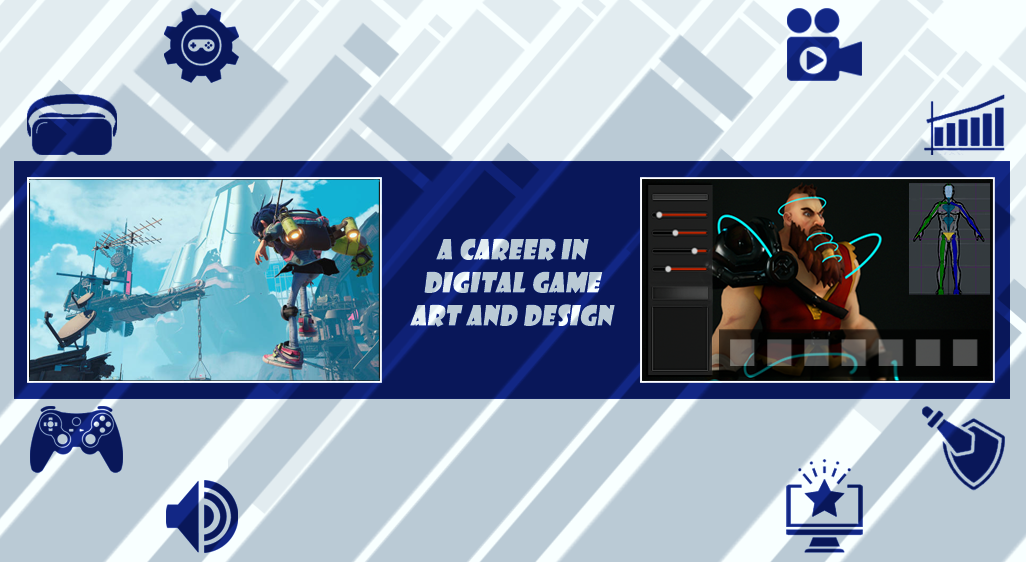 This article is intended for complete beginners who are looking for a career that will value their excitement for experimentation, invention, planning, coding, and superior craftsmanship. You are the kind of person who understands that money and medicine aren’t your things. You also understand that, given everything, you never have to wear a suit to work. Whatever the case, you need some help getting started. It’s a fantastic resource for explaining to your family and other important people why you are so energized and what you are talking about.

What Exactly Is Game Design?

Each outstanding game is created by creative individuals known as game designers. They are constantly thinking about new ideas and pondering how their audience would interact with and value the people, places, and experiences they have had. A great game architect combines subject-matter expertise with artistic flair and, most importantly, can engage and persuade people. They create the concepts, characters, settings, stories, and gameplay for the games. Specialized knowledge is almost as important as creative energy when creating a game because game producers work diligently as software engineers to create the scripting language and imaginative ideas for a game.

Why Would You Want To Work In Game Design?

Perhaps because it requires the perfect fusion of storytelling, cutting-edge innovation, and creativity in its line of work. It can also be because you enjoy having fun and need someone to assist you to realize your creative ideas. Perhaps you need a job that allows you to travel the world or even work from a distance away from your house. Or else, perhaps this is because you enjoy creating things with your hands, on the computer, and by drawing. There are many reasons why you would need to work in game design, and there are different career options available to you in a variety of industries.

Game Art: What Is It?

Every visual element you experience while playing a game depends on excellent game craftsmanship. Without graphic professionals, the game would just be lines of code on a PC or the creator’s thoughts. To bring the game’s characters, tales, and universes to life, game specialists collaborate closely with game creators, makers, and researchers.

Anyone who has creative talent and wants to use it to create computer games would be wise to research game craftsmanship. Since you are the one who creates the characters, items, and views in a game, being a game designer is possibly the most lucrative job in the industry. This includes storyboards and idea game crafting as well as pre-creation work such as clothing and surface surfaces, vehicles, weapons, monsters and enemies, and special visualizations. People who pride themselves on having a strong sense of creativity and imagination might also like working as game craftsmen. This is because, even though comic books, movies, and television shows can be highly inventive, they can’t compare to the simple worlds of video games. Nothing is as satisfying as creating endearing situations and people that gamers can interact with, explore, and become entangled in for a considerable amount of time.

You Can Be Characterized As A Team Player, Right?

Being a game designer is also suitable for you if you’re a craftsman who enjoys working collaboratively with others to create something amazing. Whether you’re working with a small independent team or a major game studio, game designers always collaborate closely with various engineers to make sure the game looks as the original designers intended. Remember that the gaming industry is demanding, thus becoming a game crafter definitely won’t be a good fit for you if you have trouble handling successes, constrained timeframes, lengthy periods, and people who are always observing and critiquing your work.

You can educate yourself on the fundamentals of creativity, such as shading and drawing. In fact, with so many amazing internet resources like free projects and video tutorials available, it’s possible to enter the gaming industry as a craftsman without ever attending college. Anyhow, unless you’re incredibly talented, you’ll need to go through a respectable workmanship program. We say this because there are so many excellent school programs available today that are successfully preparing the upcoming generation of gaming specialists.

Attending a school or institution that focuses on game craftsmanship will give you hands-on training in similar processes and programming languages used in real companies. Additionally, you’ll receive instruction from qualified teachers who are either skilled at instructing others or who have extensive knowledge in the field. As a result, there are many different careers you might pursue as a game designer. This is because games are sophisticated and as a result, everything in them requires visual components. For example, character craftsmen are hired to create either 2D or 3D character sprites, while natural specialists are in charge of creating the areas the player explores.

To create 3D models with surface, lighting, and shading, 3D natural craftspeople are needed. In the gaming industry, idea artisans and artists are also in demand. They are important because they help the team establish the game’s visual aesthetic before any actual workmanship is produced. The majority of game studios also have at least one craftsmanship manager who oversees experts and makes sure their work complies with what the game is intended to look like. When making decisions about the overall look of the game and any developed visual content, they also contribute their creativity.

How To Learn Game Designing?

Two main methods can often be used to start learning a game plan. Go to a school or demonstrate yourself at home. Which would be a suitable choice for you to choose since it is not difficult to locate significant contextual analyses for both learning methods? As much as we’d like to believe otherwise, you are entirely responsible. Some people are incredibly skilled at developing their abilities, so they rarely need help with really challenging work. However, some people need to be surrounded by others and have strict schedules and errands. Everything depends on you and how you want to work.

Whatever approach you choose to use to learn, getting started is the most important thing. It’s that simple. Get a book, start sketching, watch and analyze a movie, read stories about the game plan, and attend local events. Just get going. It doesn’t matter how excellent your education is at that time since you won’t succeed if you don’t have the motivation and drive for it.